John Fonville is dedicated to extending the language and technique of the flute. Toward that objective he has mastered all the recent technical developments and used them in various musical contexts. He performs on a complete set of quarter-tone flutes from bass flute to piccolo and has been instrumental in their development. He has premiered works by Ben Johnston, Sal Martirano, Joyi Yuasa, Roger Reynolds, Hiroyuki Itoh and Paul Koonce and recorded on CRI, New World Records, Neuma, OO Discs, Advance, TR2, Orion and Opus One. He is a member of the Eolus Quintet and Sonor, the resident contemporary music ensemble at the University of California at San Diego where he is Chairman of the Music Department. 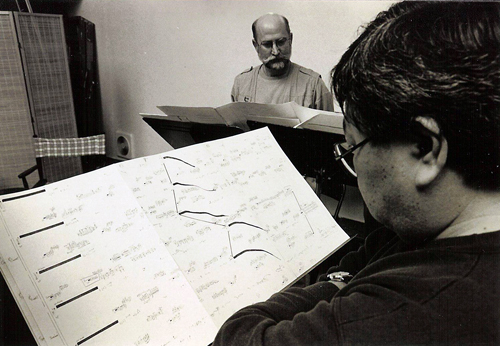 Eric Mandat is Professor of Clarinet and Distinguished Scholar at Southern Illinois University at Carbondale, where he received the 1999 SIUC Outstanding Scholar Award. He is a member of the Chicago Symphony’s MusicNOW ensemble, and he performs frequently throughout the United States and abroad as a soloist and chamber musician. He is the recipient of 2000 and 2005 Illinois Arts Council Artist Fellowships for Composition, and his music has been performed throughout the world. Mandat received his education from the University of North Texas (B.M.), the Yale School of Music (M.M.) and the Eastman School of Music (D.M.A.).

Morgan Powell is a composer and jazz trombonist whose works have been performed throughout the U.S., Europe and Japan. His many awards include three NEA Fellowships, a Fromm Scholarship, an American Music Center grant, Illinois Arts Council Fellowships, and awards from Meet the Composer and ASCAP. His compositions are published by Margun Music, Lingua Press, Smith Publications, Brass Music Limited, Media Press, Brixton Publications, and TUBA Manuscript and are recorded on Opus One, TR2, Einstein Records, New World Records Crystal Records, University Brass Recording series, Advance, Century, TNC, and Chicago Lakeside Jazz. He has taught at North Texas University, Berklee School of Music and the University of Illinois at Urbana-Champaign.

Ray Sasaki  is Professor of Trumpet at the University of Texas, Austin. He is a member of the St. Louis Brass Quintet and JQ (Jazz Quintet) and is an active recitalist and recording artist. He was a featured recitalist at the 1994 International Trumpet Guild conference and a featured cornet soloist for the 1994 European Brass Championships and recorded for Einstein Records, New World Records, CRI, Deutsch Grammaphon, Ubres and the Crystal labels. He has commissioned numerous new works for the trumpet, most notably with the Cleveland Chamber Orchestra, the International Trumpet Guild and the Jazz Members Orchestra of Chicago. A renowned teacher, his students won the National Trumpet Competition (1995) and hold positions in major symphony orchestras.

Staley has recorded with Fred Frith, Elliott Sharp’s ensemble Carbon, and for John Zorn on several records including, Spillane, The Big Gundown, Cobra, The Little Lieutenant of the Living God (Weill/Zorn) and several others. Staley also performs and records with the Tone Road Ramblers, a collaborative chamber-improv ensemble, together since 1981. He is the 2005 recipient of the Susan E Kennedy Memorial Award, given for his years in support of artists. 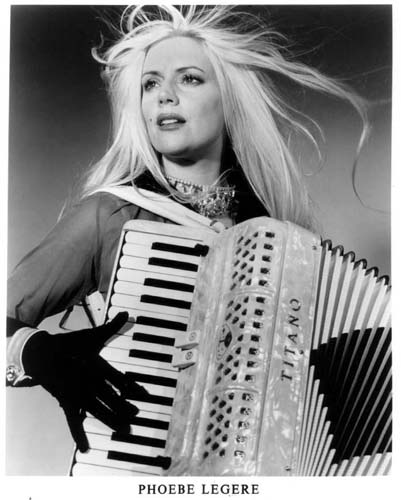 Phoebe Hemenway Legere, composer, multi-instrumentalist and soprano, studied piano performance at the New England Conservatory and Vassar College. She later studied jazz improvisation and harmony with John Lewis and composition with David Levy and Dinu Gezzo. Respected as a serious classical and jazz composer and improviser, she is also an award winning songwriter. Legere is the composer of four operas. She has had musical roles in several movies and has made five CDs. The latest, Blue Curtain, on Einstein Records, combines Native American traditional singing, electronics, spoken word, classical and jazz music. Legere is the host of “Roulette TV,” a show focusing on experimental music and multi-media art.

Dorothy Martirano is concertmaster of the Champaign-Urbana Symphony. She is violinist for Maria & Company and the Tone Road Ramblers, and Regularly appears on new music festivals and contemporary music concerts Nation wide.

Dorothy has toured extensively in the United States and in Europe, Asia, and South America She has recorded for Centaur, Polydor, New World Records, Hal Leonard, Paramount Pictures, Einstein Records, the Korean Broadcasting Corp, CUCD, Pogo Studios, and Sound and Logic Studios, among others.

She has been arranging music for strings since 1981.

Howie Smith, a virtuoso saxophonist, composer and jazz musician does not easily fit into a single category. As a performer he has worked with musicians, organizations and composers as diverse as Luciano Berio, Dee Dee Bridgewater, John Cage, the Cleveland Orchestra, Mark Dresser, Abraham Laboriel, Mike Nock, Elvis Presley, Clark Terry, and the Tone Road Ramblers. His recorded performances are equally diverse: from the big bands of Phil Wilson and Frank Mantooth to the Australian quartet Jazz Co/op to saxophone concertos by Edward Miller, Salvatore Martirano and David Baker (the latter two recorded with the Cleveland Chamber Symphony). He has also presented numerous concerts and workshops throughout the United States, Canada, South America, Europe and Australia.

His catalogue of compositions is extensive. He has created works for conventional big bands and combos; for string, wind and percussion ensembles; for electronics; and for mixed media. Recordings of his work may be heard on the Albany, Philips, Polydor, Optimism and Sea Breeze labels, and his music for jazz ensembles is available through the C.L. Barnhouse Co., Doug Beach/Kjos, Kendor Music Inc., Otama Music and Walrus Music Publishing. He has been Coordinator of Jazz Studies at Cleveland State University since 1979 and has twice served as co-chair of both the Jazz Fellowships and the Music Overview panels for the National Endowment for the Arts. He has been associated with Yamaha as an artist/clinician since 1971.